This Kennel started as an idea between two friends who decided to breed a dog that would not only be a friend, but a good hunting buddy also. KUSA member 1008160. 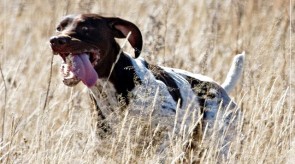 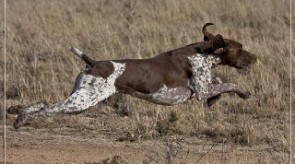 "A Prayer From An Old Short Hair"


I waken from fitful sleep, legs jerking, low growls deep within my chest,

Tired eyes look down on a wrinkled graying muzzle

With effort I roll, Looking at gnarled scarred feet and legs bearing a million old cactus spines buried within,

Reminding me of all those prickly pear and jumping cactus.

Slowly I lift my weary head and gaze upon a graying, cloud filled November sky


Longingly I gaze into the heavens above.

Lord, please grant my master the strength to make one more season;

twelve years have passed since our first hunt together...

I have led him through cactus and mesquite, tall grass, rocks hills and creeks.

We have seen together ten thousand covey rises, a thousand cackling roosters and a million ducks taking flight.

But now, as I look in the window... I see my loving master has tired... his pace has slowed and his once commanding voice raspy and faded.

Lord... three lifetimes now have I pointed his quail, flushed his roosters, marked his ducks,,, and brought them all to hand... well most anyhow, and the few I ate.... well he didn't really want them anyhow.

But time has caught us both... now he is slow to rise from his rocker as am I from my pad... his weathered face and my clouded eyes... neither the same as before... but still the lines in his face are maps I follow in my dreams... when clearer eyes led the way through green briar and snow... sandstorms and blinding rain.

Oh Lord grant us one more season so that as we each pass from this life we may pass on to our sons and daughters the life, the love, the joy and the sorrows of a thousand hunts we've shared.

And Lord, finally when the season is done would you grant him a soft chair, and me a fine rug...

By the hearth in your heavenly lodge.....

Does living in the house ruin a dog’s scenting
capabilities? Of course not. There are situations that
can have a temporary effect on a dog’s nose, usually
where there’s an over-abundance of a specific scent in
a small, enclosed area; but that can happen outside as
well. Cedar chips used as bedding in a doghouse,
exhaust fumes from a vehicle, an encounter with a

skunk – any overpowering scent can temporarily
overwhelm a nose, including our own. And those
scents aren’t housedog specific.
Does living indoors make a dog fat and lazy so it
doesn’t want to hunt? Nope. What makes a dog fat
and lazy is too much food and not enough exercise.
The same thing can happen to a dog that lives
outdoors. And we are pretty certain that the house dog
doing back flips by the door because we took the gun
out of the safe is just as excited to go hunting as the
dog living outside in a kennel.

In fact, there are a number of benefits to having a bird
dog spend time in the house. A stronger bond forms
between human and dog due to the greater amount of
time spent in each other’s company. The amount of
interaction between the dog and its family makes a big
difference in the respect level given by the dog in the
field, assuming the people involved are strong leaders.
Remember, each and every interaction with a dog is
training, whether you intend for it to be or not. And the
interactions between an indoor dog and its family are
far greater in number than those of an outdoor, kennelonly
dog. A side-benefit of this is that an inside dog
gets a chance to “read” his owner much more often and
under varying conditions, often making it far more
perceptive than his kennelled counterpart.
If you make use of those interactions, you can gain a
lot of ground indoors that will benefit you in the field.

Feeding Time
This is a great way to position yourself as pack leader.
The pack leader is in control of the resources and
always gets to eat first.

Basic Manners
One instance is who goes through the door first.
Always make your dog wait while you walk through a
doorway. Again, this is a leadership position. Plus, it
gives you a great chance to reinforce the “whoa”
command. Just imagine how many times a day a dog
has to wait at the door and then be released.
Every one is a training exercise and can be transferred
to the field.

Where a dog sleeps is also a control exercise. A crate
is ideal, because it gives a dog its own place, just as an
outdoor dog has a doghouse and a wild dog has a den.
That doesn’t mean a dog can sleep only in its crate. It
can have a dog bed or two throughout the house. And
if you want, it can sleep on furniture or your bed as
well. If you decide to permit this, you also have to
make sure the dog understands that it belongs to you.

Information
Support
Gallery
About us